Brick and mortar churches were on lock-down, but home churches continued to meet. 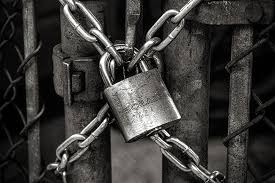 With one pastor arrested in Tampa, FL and a pastor in Baton Rouge, LA having a petition (signed by thousands!) demanding his arrest for continuing to hold church meetings, this pandemic has revealed how fragile religious freedom really is in the United States.

There will no doubt be lawsuits and court-cases going to Appellate Courts, State Supreme Courts, and beyond. But regardless, the landscape for American Christians and the free practice of our religion has changed...forever.
But what else is new?
The early Church met in homes from the beginning, and because of religious persecution, were forced to make the choice to obey a higher mandate from a higher authority than that of earthly governments.
They began meeting in secret.
Many Christians around the globe still do so.
The practice of the Christian faith includes "not forsaking" the gathering of ourselves together, "even the more so as you see the day approaching." That means Christians must find ways of gathering together most especially in troubled times.
Many Believers apply this scriptural admonition by holding home meetings, which may not fit the mold for traditional brick and mortar church organizations, but align perfectly with Jesus' model when he said "Where two or three are gathered together in my name, there I am also."
Currently, a gathering of two or three is legal. Isn't it time for God's people (not just pastors) to start thinking out-of-the-box, and begin applying the unfiltered Word of God to the practice of our faith?

July 07, 2020
Ever heard the old song, "Brighten the Corner Where You Are?"   Time for Christians to step up to the plate and become voices of hope--influencers--in the spaces God has placed us.   Representatives from One Way Press recently attended a City Commission meeting and were delighted to participate in prayer with a local pastor as a part of the meeting. Following up on the City Commissioners meeting, we decided to check out the County Commissioners Meeting.  It was a different story on the county level. Rather than opening with Christian prayer, the County Commissioners opened their meeting with a secular humanist invocation, led by a chapter leader from the Freedom FROM Religion Foundation .  Does that alarm you? It should. It is long past time for Christians to become involved in their local political agendas and to vote knowledgeably for officials at every level of our local, state, ad national governments. Check your city's website for posted c
Post a Comment
Read more

July 02, 2020
One Way Press supports functional equality between women and men (as opposed to the intangible, unintelligible, ethereal, "spiritual," equality that under-girds complementarianism and traditional role religion). Follow this blog by email or subscribe to newsletter updates for details on how to participate in the live 10th anniversary conference call commemorating the 2010 Seneca Falls 2 Freedom for Christian Women Conference!
Post a Comment
Read more